For decades, Terre di Sacra, on the Tuscan coast in Capalbio, has been the summer redoubt of understated Italia bene. A private estate owned by the Puri Negri family, its collection of boho-chic villas and cottages lines the Burano lagoon, part of a state nature reserve teeming with sea birds. They also get the questionable benefit of the train shrieking along the track just behind them, and sit hard by the two-lane Strada Provinciale Litoranea. This tends to have a self-selecting effect on the renters, in a good way.

This year, Margherita Puri Negri, Terre di Sacra’s next-generation custodian, will roll out Glamping Terre di Sacra, on a site next to La Dogana, which might be my favourite beach club in all Italy (come for the buzzy scene, stay for the superb food and wine list). The tents – timber-and-canvas structures, scattered in the Mediterranean scrub at the sea’s edge – range from doubles to “maxi” family-size lodge tents, which sleep up to five. All have fridges and espresso machines inside (the superior, deluxe and premium lodges also have tiny but nice kitchens), and private wood decks with dining tables and/or loungers. It’s likely to become one of the best intersections of good-value seaside style and protected nature in the country. Ilcampeggiodicapalbio.it, @glampingterredisacra; from about €228

Getting your glamp on in the US Virgin Islands

Lovango Resort + Beach Club, a private resort on Lovango Cay that’s a 15-minute boat ride away from St John, is 2022’s buzziest arrival in the US Virgin Islands, and its first new build in decades. It’s got a lot in its DNA to recommend it: founded by Gwenn and Mark Snider (who’ve long made lots of stylish travellers happy at the Winnetu on Martha’s Vineyard and The Nantucket Hotel), with interiors by Michael Cramer (the man behind cult favourite destination Gurney’s, in Montauk on Long Island), a bar featuring spirits they brew themselves, and an island boutique shop which stocks Paravel luggage and jewellery from CVC Stones.

For accommodation, there are villas which sleep up to nine, and “treehouses” – perched above the canopy – which sleep four. But consider Lovango’s smallest option, which is also arguably its sexiest: one of the glamping tents overlooking the water, with a mix of air conditioning and natural cooling systems, open raw-wood decks with chaises for lolling, and panelled canvas walls that push back, curtain-like, to reveal 180-degree views (through screened windows, to keep out those mozzies). They’re eminently private, but also an easy walk to an alfresco “lobby” with cart service down to the beach club, bars and restaurants. lovangovi.com, from $995 a night

Tulum and canvas seem a boho marriage made in heaven; if there’s anywhere it feels right to have a beach holiday in a tent, it’s here. Habitas Tulum, one of the handful of outposts from the small, wellness-and experience-driven hotel company, was launched by British entrepreneur Oliver Ripley in 2017. All the accommodations here, whether nestled in jungle or right at the Caribbean’s edge, are tents, with wood floors, thatched palapa roofs and outdoor showers.

The midcentury inflected furnishings and pretty kilims take the style game up several notches, and the abundance of private space – gardens, decks, hammocks and, in some cases, private pools – bring the luxury factor. In keeping with all Habitas properties, the healing and adventure options are first-rate, with everything from energy and music therapies to swims in the inland cenotes on the docket. ourhabitas.com, from $400 per night

Gotland is Sweden’s not-so-secret secret island retreat, long the summer stomping ground of sailors, families, campers and surfers. Yes, surfers in Sweden; and from the end of May, one of the places they frequent is the blowsy, beachfront Surflogiet camp, on the island’s west coast, an easy drive from the main port of Visby. This is cool beach camping reduced to its elemental parts: white canvas tents, lined with dhurries, furnished with big Hästens beds, nightstands, writing tables, the odd acoustic guitar.

Throw cushions and low tables are out front on the sand for breakfast, and there’s an alfresco bar-restaurant on site – think sawed-off log seating, fairy lights and feet in the sand – for everything else. The sauna is bookable in two-hour slots, and yoga is offered five days a week, with a massage therapist on hand to do in-tent rub downs. Along with, of course, Baltic-style surf lessons, for adults and kids alike. surflogiet.com, from about £212

A jungle-safari fantasy on Bali

Bill Bensley is the Harvard-trained architect who made his name designing some of Asia’s most extravagant hotels and resorts – places where colour, pattern, materials and original art converge in ways that scour the very idea of minimalism from one’s consciousness. Tents often feature in his design schemes, from the fantastical Rosewood Luang Prabang in Laos to Shinta Mani Wild, his own safari camp/conservation project deep in the southern Cambodian rainforest. One of the most delightful iterations of the Bensley dream is on Bali, which as of this month is open to international travellers. 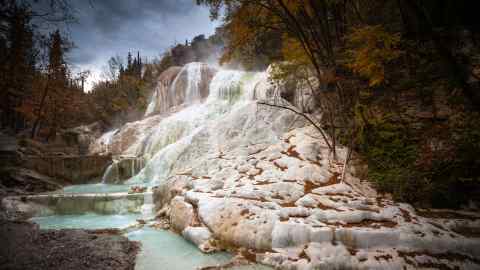 Though all 23 of the accommodations at Capella Ubud are indeed fashioned from (black) canvas, they’re tents that underscore the glam in glamping, from the silk-lined ceilings and roll blinds of striped ticking, to the ornate carved screens and freestanding copper bath tubs, to the huge teak decks and pools that cantilever out over the jungle canopy for what feels like miles. And there’s a reason the resort has won kudos the world over: everything from the mixology to the spa experience is definitively creative. Not cheap; but if your bucket list comprises an unbridled jungle-safari fantasy, calibrated to delight, and you’ve the means, worth it for a night or two. capellahotels.com, about £640