Forget camping. How about glamping?

To fitness coach Xiao Pengli, “camping” meant a simple overnight picnic trip, or a way of outdoor surviving, until he recently had a very different experience on Changxing Island in Shanghai with his girlfriend.

The campsite they visited is located in Changxing Countryside Park in Chongming District, where people bring their own tents or rent them for nearly 900 yuan (US$140) a night (one tent accommodates up to three people). The campsite provides a lavish barbeque, beverage services and an evening show.

“I never thought it would be an eye-opener for me, because, hey, what could be special about camping?” said Xiao. “Boy was I wrong!”

At the campsite, some families brought tents high enough for an adult to stand straight up inside; some brought their own grills and made Wagyu steaks; many had their own pour-over coffee maker; some enjoyed high-quality wine.

“Compared to them, my girlfriend and I were like hobos,” Xiao said. “We had a very simple tent, ate homemade sandwiches and drank Coke. Nothing else.”

What Xiao didn’t know was that nowadays “glamping” is in vogue rather than traditional “camping.” Glamping, which has been popular in the West and Japan for some time, refers to outdoor camping with amenities and comforts not usually used in camping. A blend of the words “glamorous” and “camping,” glamping is a relatively new idea in China.

“You know in ‘Harry Potter,’ when those wizards and witches go camping, the inside of their plain-looking tents resembles a home or a hotel room; that’s glamping,” Xiao said.

Xiaohongshu, a lifestyle sharing social networking service, has more than 250,000 posts about glamping, up about 10 percent from last year. People share pictures and videos showing off expensive tents (some cost more than 10,000 yuan), comfortable beds, electrical equipment and pricy camping attire for children.

Meanwhile, Alibaba’s Fliggy, an online travel service, reported that there was a 14-fold increase in tents and camping trip orders in the past year. Tmall, an e-commerce platform owned by Alibaba, reported that its glamping-related search volume increased 130 percent compared with last year. The most searched items were “outdoor coffee makers” and “retro gas lamps.”

The history of glamping is believed to date back to the 16th or 17th century in Scotland. Sir John Stewart, a nobleman, set up the first luxury camping site for King James V and his mother. The nobleman filled the tents’ interiors with furnishings and adornments from his own palace.

Glamping didn’t become a buzzword until 2007, and since then the idea gradually spread to the United States and Japan in the next decade. The word was officially included in the dictionary in 2016.

With the COVID-19 pandemic binding people home – cross-province travel has again been suspended in several areas in China – many are planning glamping in their hometown instead of long-distance traveling.

Some outdoor enthusiasts are not big fans of glamping. Roger Liu, a guitarist and an outdoor activist, said he believed that “glampers” are just followers who could care less about real outdoor activities.

“Camping should be rough and basic, because that’s how you get close to Nature,” he said. “If you want a luxurious night, just go book a beach hotel.”

Liu said he once organized a camp tour near a village in Jiangsu Province and was annoyed by nearby glampers.

“They did nothing but take pictures of their fancy tents,” he said. “I think it’s a kind of blasphemy.” 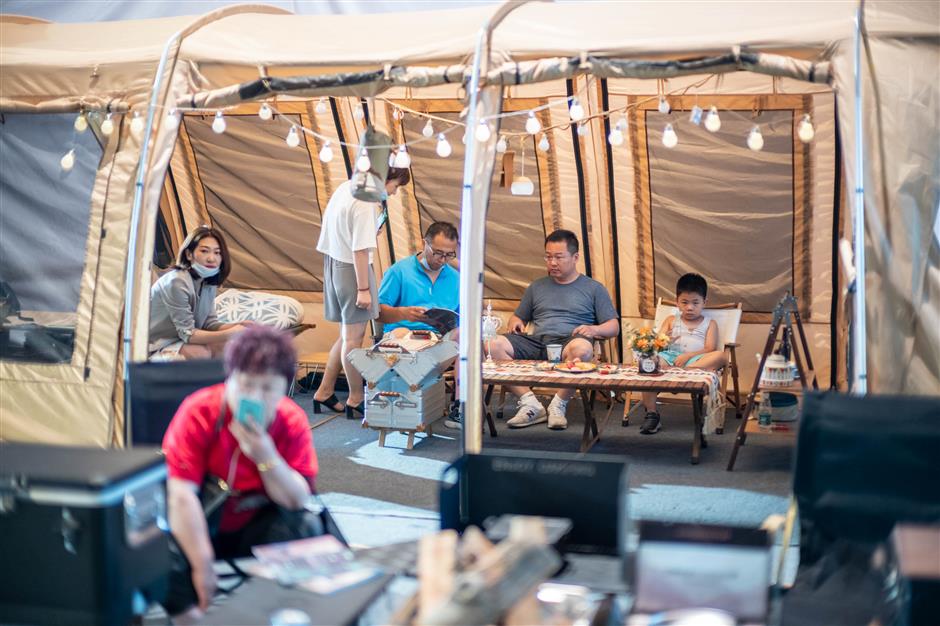 A family tests out high-end glamping tents at a Beijing exhibition.

Some glamping aficionados, however, disagree.

“It is a new way of meeting people, making friends and creating a temporary living environment that you find pleasing. It’s much more than just living in Nature,” said Vivian Su, an experienced glamper and camping planner.

Having been a glamper for two years, Su, whose daily job is running a homestay hotel in Shanghai, goes on glamping trips twice a month. She doesn’t spend much money on equipment as most of the appliances and adornments are handmade.

“Glamor doesn’t necessarily mean expensive,” she said. “I believe that as the market grows, glamping will become much more than taking pretty pictures to post online.”