In a city where many of the world’s most prominent architects have yet to leave their mark, Swiss firm Herzog & de Meuron continues to build; its fourth building in New York City opened this week. The firm has become something of a staple in the city’s luxury real estate market over the past decade, a tenure it began with a condo project at 40 Bond Street in 2007. Since then, Herzog & de Meuron has designed a tower at 56 Leonard Street and another apartment building at 160 Leroy Street. Its new building at 215 Chrystie Street is for Public, a new hotel owned by hospitality magnate Ian Schrager, who also worked with the firm on 40 Bond and 160 Leroy.

A rendering of 215 Chrystie Street by Herzog & de Meuron

The concept for the tower came from Schrager’s vision for a hotel that would be “tough luxe.” Rather than creating a traditional luxury building that might have an eye-catching form and interiors coated in marble, the project was meant to be “straightforward” and “simple,” in the words of Herzog & de Meuron Senior Partner Ascan Mergenthaler. It is difficult to do something spectacular and new in New York City, he said, because the zoning code is so restrictive: “We’re working in a straightjacket. There are so many restrictions.” Those restrictions forced the team to focus more on the basics of structure and finish, rather than expressive form. 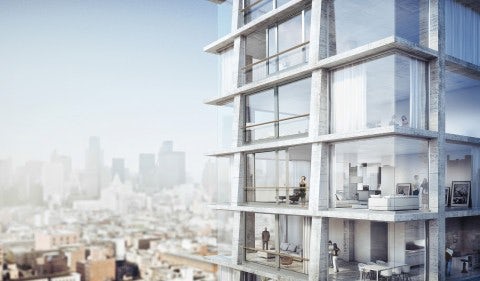 A detail rendering of 215 Chrystie Street by Herzog & de Meuron

The stripped-back aesthetic worked well with Schrager’s desire to reinvent the notion of luxury hospitality. Public is Schrager’s attempt to reinvent the industry for the second time. In the ’90s, his company pioneered the concept of the boutique hotel at a time when high-end hospitality was dominated by corporate international giants that promised the visitor the same perfect experience no matter whether they were in Boston or Bangkok. Now, he says, “the industry is in denial about the mortal threat of Airbnb … This is an effort to respond to that threat.” 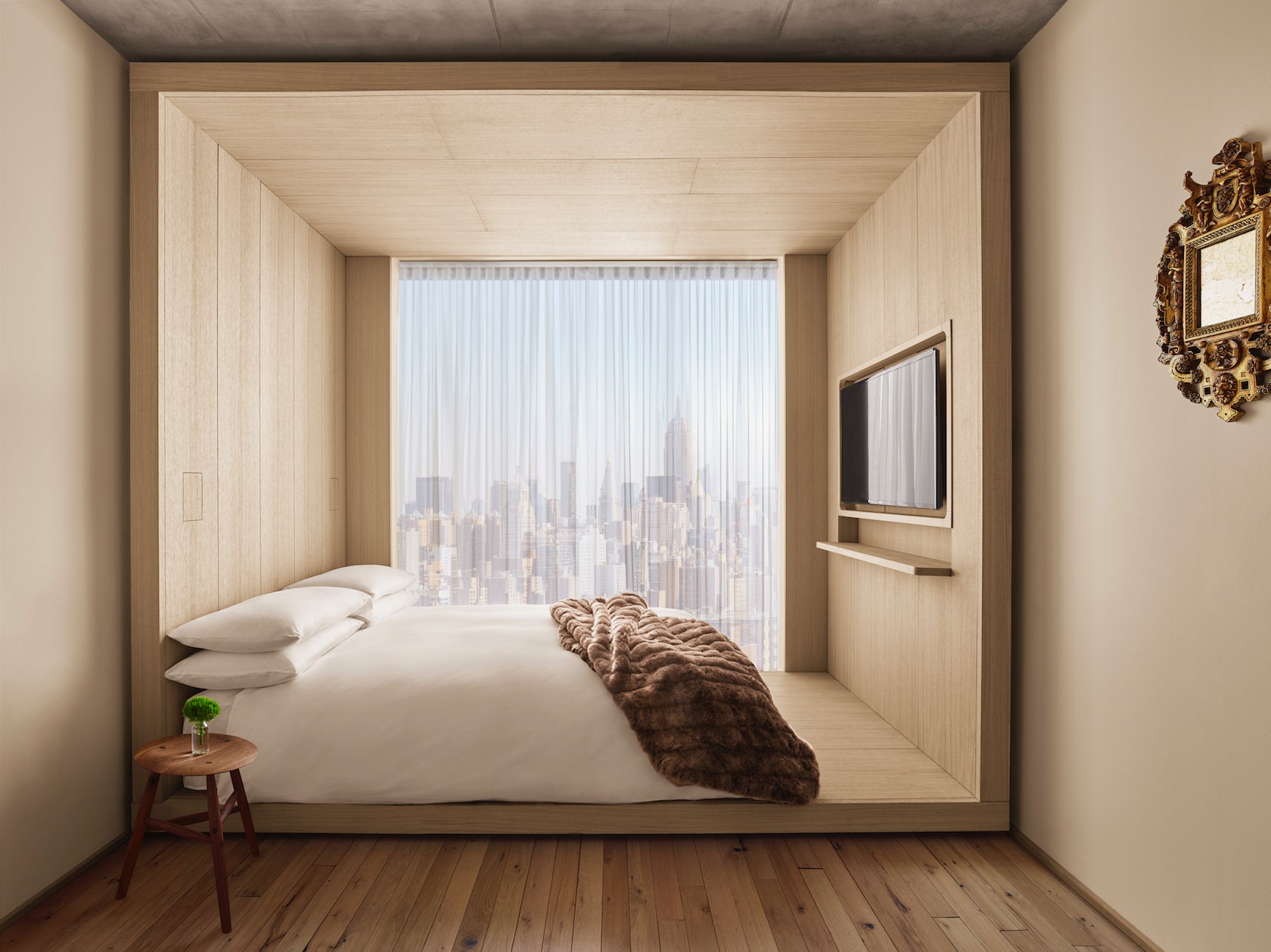 A room interior from 215 Chrystie Street by Herzog & de Meuron

Public is meant to provide what a stay in a stranger’s apartment cannot: entertainment, culture and an environment full of like-minded people. “The notion of luxury has changed,” Schrager says, and in the tech era, it’s not about white-gloved attendants catering to your every need. Modern luxury is as much about unexpected experiences and encounters as it is about frictionless elegance. Public claims that its array of bars and performance spaces will create “a party machine” that may be more like glamping at Burning Man than staying at the Four Seasons. 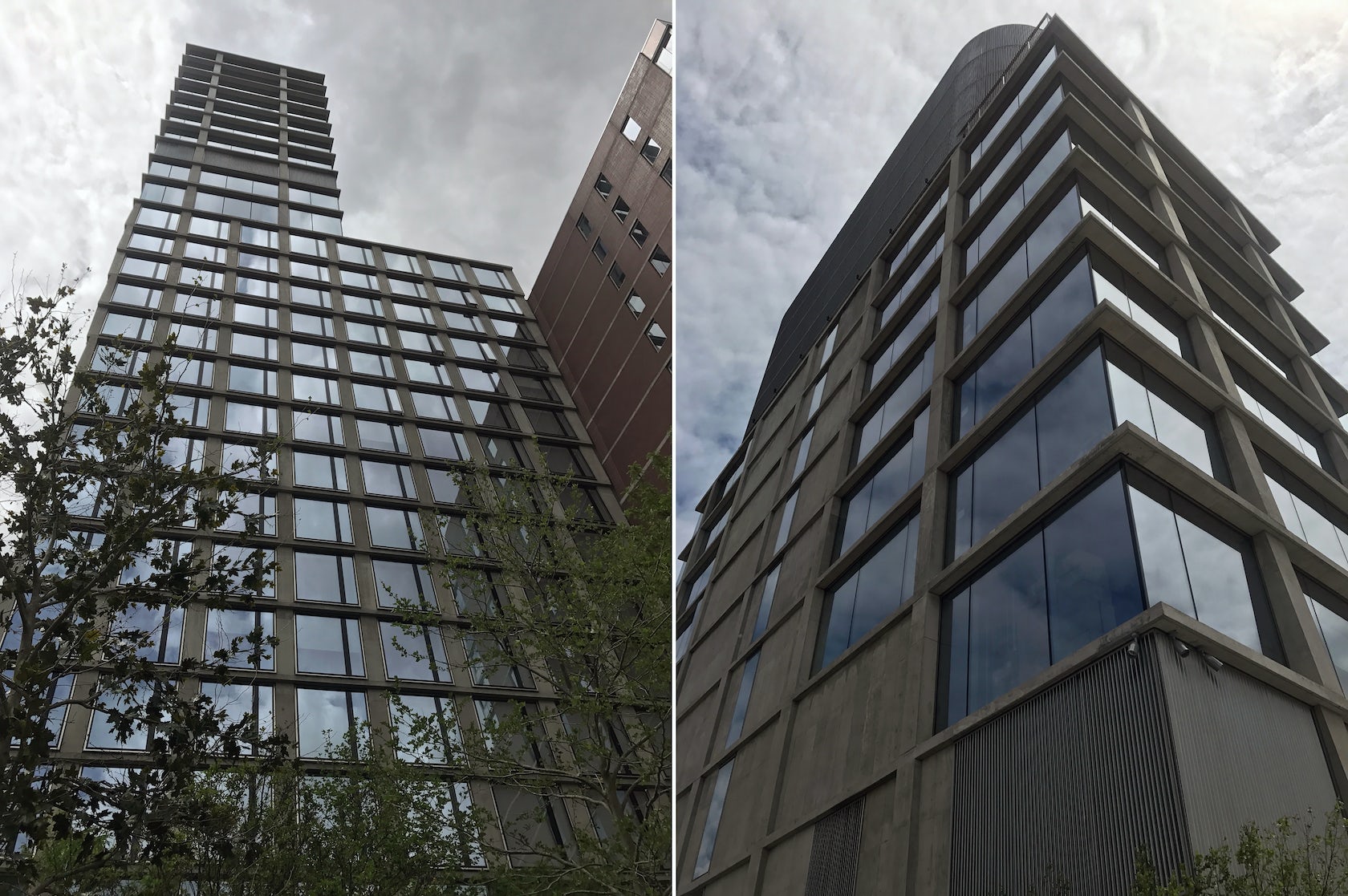 Reflecting the notion that the hotel should be a community buzzing with activity, Mergenthaler described the building as a beehive. Like a honeycomb, the building lacks excess ornamentation and clearly expresses the interior organization on its exterior faces. Each hotel room is nestled in one unit of the structural grid and meets the façade with one large window spanning the space between two exposed columns. In America, Mergenthaler said, “a lot is about cladding buildings. There’s a separation of building, skin and structure,” but here “the façade comes from the inside.” The building’s exterior surface is a play of pronounced floor plates, bare columns and frameless glass windows or, in Mergenthaler’s words, a “concrete skeleton with windows punching through like jewels.” 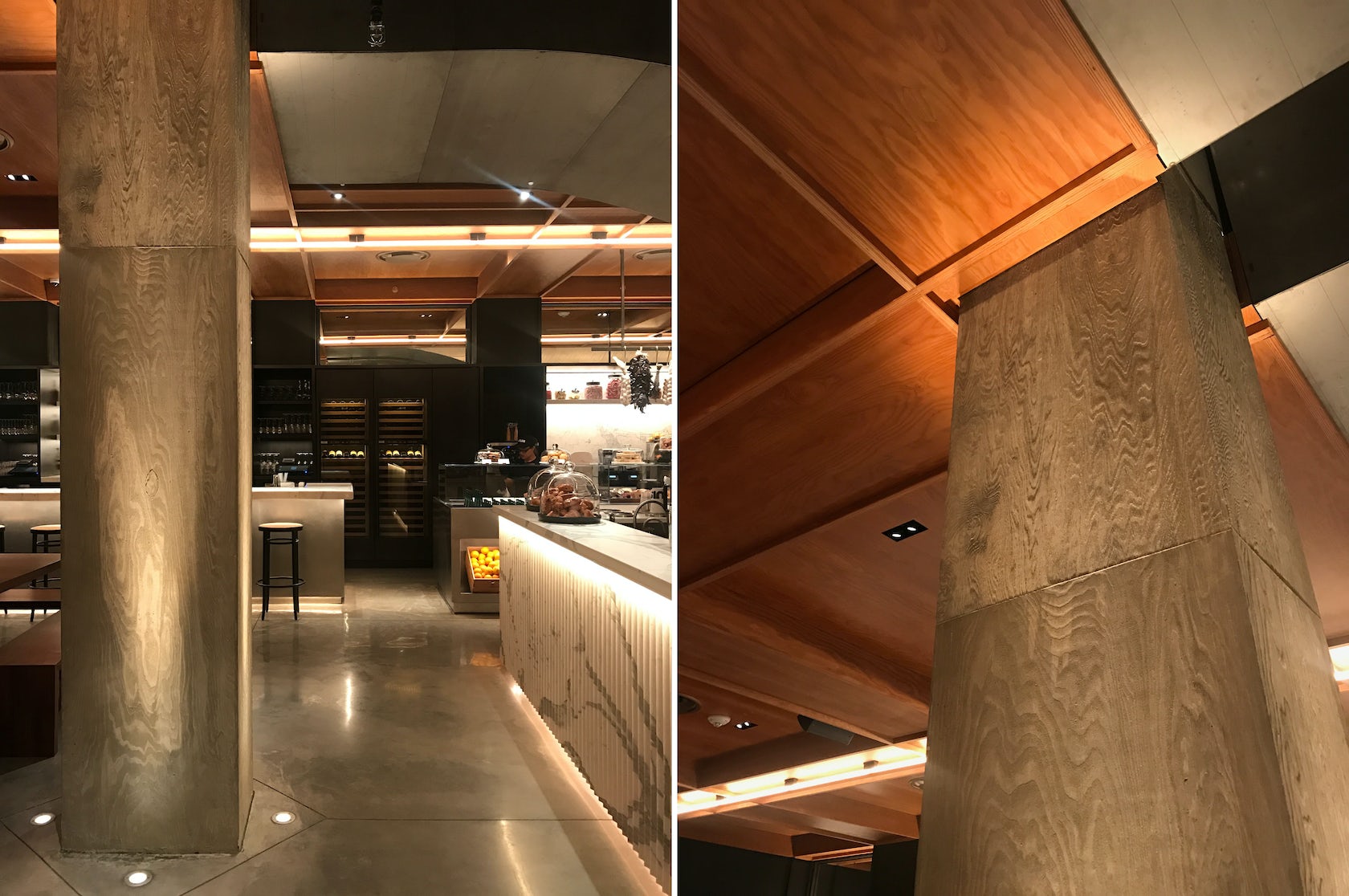 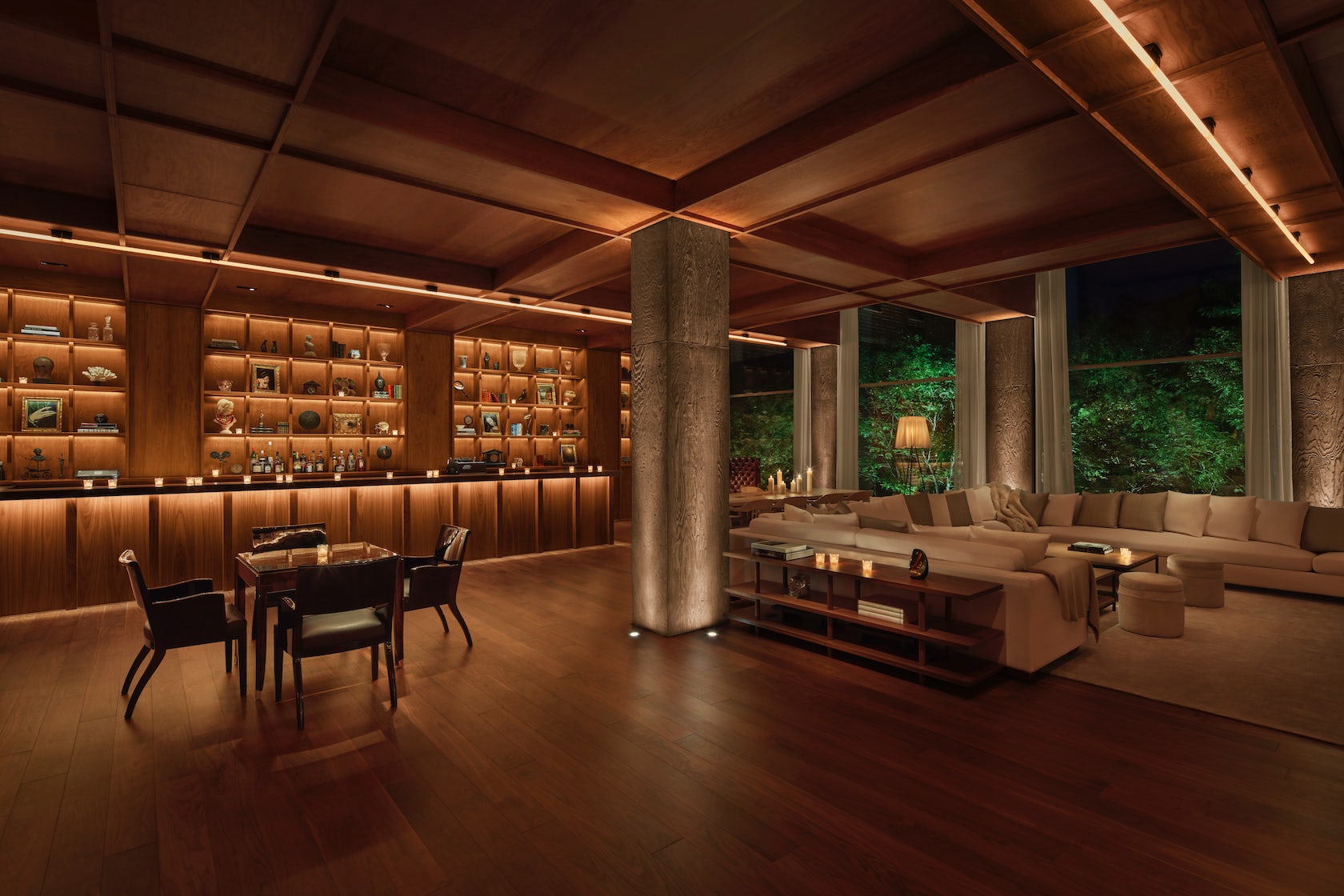 Unusually for a project like this, Herzog & de Meuron was also given control of the hotel’s interiors, which reflect the building’s atmosphere of “simplicity and sophistication.” Rather than covering up the structure, concrete columns are left exposed and drop ceilings are crafted out of plywood. Typifying Herzog & de Meuron’s careful sensitivity to material, the concrete is richly patterned with its plywood formwork’s grain. To create the concrete’s vivid texture, the formwork was wire-brushed before assembly to increase the roughness of the grain. Mergenthaler explained the approach by saying “people should want to touch things,” a notion picked up in the room’s textured wood walls and smoothly sculpted sinks.

The project completes the firm’s New York City “trilogy of concrete and glass” begun with 56 Leonard and 160 Leroy Street. The tallest tower of the group, 56 Leonard expresses itself in its scrambled crown of cantilevered floor plates; 160 Leroy caps the edge of Manhattan’s street grid with its gently undulating sculptural form; and 40 Bond, the slight misfit, took a new approach to the cast-iron construction of its neighbors in Soho and clad a metal frame in delicately curved glass. This legacy suggests a healthy working relationship between client and architect, but this is not to say that the two agreed about everything.

At the building’s opening, Schrager disagreed that the new building had anything to do with the tower on Leonard Street, perhaps because that is the only Herzog & de Meuron project in New York with which Schrager was not involved. The hotelier also revealed that the hotel’s generous forecourt had less to do with the architect’s lofty idea to create public space and was more about avoiding the subway station that rests beneath the front of the lot. Mergenthaler, for his part, said that Schrager was initially less than enthusiastic about the finely crafted concrete columns and was disappointed that every column would have a slightly different finish. In between Mergenthaler’s sheepish chuckle and Schrager’s slightly displeased scowl, one got the sense that even in designing “a party machine,” luxury moguls enjoy complete control.