Johnny Vegas teams up with aristocrat to open new…

Proudly working-class comedian Johnny Vegas is going into business with an aristocrat.

The Benidorm star, 52, is moving his popular Field of Dreams glamping site from Harrogate in North Yorkshire to the grounds of Melbourne Hall in Derbyshire.

The stately home in Derbyshire is owned by Lord Ralph Kerr, heir presumptive to the Marquessate of Lothian and the chiefship of Clan Kerr.

New venture: Proudly working-class comedian Johnny Vegas is going into business with an aristocrat to launch his Field Of Dreams glamping site

Johnny previously revealed that launching an upmarket campsite, with vintage vehicles as bespoke chalets, was in part a tribute to his dad’s memory.

The comedian, whose real name is Michael Pennington, lost his father Lawrence in 2017.

Guests can book out converted school buses and planes from £350 for a minimum two-night stay.

As well as his fleet of vehicles, Johnny is said to be adding a boat and a helicopter for guests to stay in later this year.

Johnny documented the venture in his Channel 4 series, Johnny Vegas: Carry On Glamping, which will return to screens later this year.

He longed for his mum’s seal of approval on the project — even naming his first vehicle Patricia in her honour. ‘ 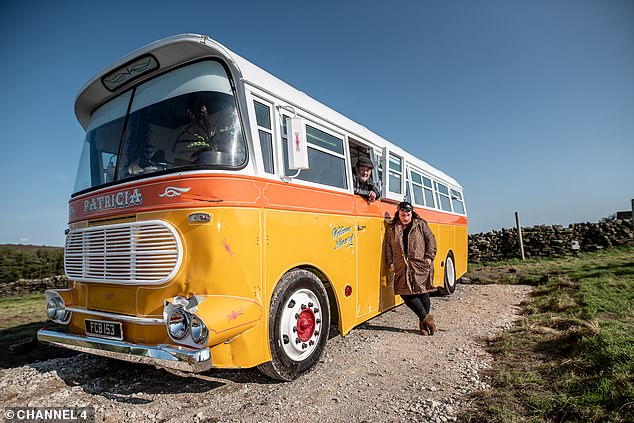 One to watch: Johnny documented the venture in his Channel 4 series, Johnny Vegas: Carry On Glamping, which will return to screens later this year (pictured with his assistant Bev)

It comes after Johnny revealed he has been diagnosed with ADHD.

The Romantic Getaway star admitted he is in the ‘early stages’ of working through medication, after he was diagnosed with ADHD (attention deficit hyperactivity disorder) ‘just before Christmas’.

Johnny told BBC Breakfast on Wednesday: ‘It was always kicked around as a notion. I’m very careful about things like this and discussing it, but, no… I was diagnosed just before Christmas.

‘Eventually, I bit the bullet and went in. I’ve had friends who have been diagnosed. I’m in the very early stages of working through meds and things like that.

‘It just answers a lot of questions about behavioural issues.’

The former Benidorm star was asked what difference the diagnosis has made to him and he replied: ‘I think it’s just a lot of things make sense.

‘I suppose it’s how your brain organises itself. I always knew I was disorganised, but that was the kind of joke that, “I am as they made me”.’

He continued: ‘It helps make sense of a lot of things at school. But I’m only just on the verge of learning about it.

‘It was more a discussion of, “You’ve probably got something”,’ so it is very different to saying, “No, you have”.’

Symptoms typically appear at an early age and become more noticeable as a child grows. These can also include:

Most cases are diagnosed between six and 12 years old. Adults can also suffer, but there is less research into this.

ADHD’s exact cause is unclear but is thought to involve genetic mutations that affect a person’s brain function and structure.

Premature babies and those with epilepsy or brain damage are more at risk.

There is no cure.

A combination of medication and therapy is usually recommended to relieve symptoms and make day-to-day life easier.